I began my studies in piano at the age of 6 in the school of arts “Luis Casas Romero “in the same city, in that period i realize some concerts in state institutions such as the Museum of the Revolution and at the Teatro Principal with works by Cuban composers.I Transfer to the capital, continued my studies at the Conservatory “Manuel Saumell” with Enrique Gonzalez.Transfer to Bogota Colombia where continue my piano studies at the National University Bogota and then at the Javeriana University under the direction of teacher Radostina Petkova. In this period I made several concerts as: Caro y Cuervo Institute, Bach Room A. Cristancho school in Bogota.Along with my studies exercis as a teacher at school Tabio and Tenjo subjects piano, music theory and music history.I performed a piano concert in the house of Tabio and Tenjo culture with works by Bach, Beethoven, Chopin, Albeniz and composers of Latinamerica as Ernesto Lecuona and Adolfo Mejia.

It follows magistral Courses with the Austrian pianist Alexander Jenner Prof. at the University of Vienna in the hall of Luis Angel
Arango. “Mozart and the interpretation of his piano sonatas.” At this time i won the competition for piano “Young Performers” in Bogota with the first prize, concert in the prestigious Luis Angel Arango room.

In 1997I travel to Salzburg Austria continue my piano studies in that city at the University of Arts and Music Mozarteum under the guidance of maestro Brian Lamport from England and later with the Prof. mag. Stan Ford from U.S.A.

Live performances in cities like Paris and Madrid and Vienna with the Jazz Ensemble of Mazarteum University. Further i played a Concert at St. Gervais in Paris as a commemoration of the end of the century 2002 and in 2003 Piano solo concert in Paris.

Then my pedagogical study culminate in the diploma IGP1 at the Mozarteum with distinction. In this same period I was granted Conservatory scholarship to continue my study of master in Mozarteum under the direction of Professor Stan Ford.

2005 finished my master degree studies awarded  with the title of MAG. art at the University of Music and Arts Mozarteum, with the thesis: “Prokofiev composer between freedom and regime” and concert degree.

The next year dedicated my music developement as Piano teacher and as ecclesial female choir director with alot fo churchs performance and travels.

Compositions career began in 2017 with my Album Reality of Dream award winner of Akademia los Angeles Award for the best contemporary piano Album and two Global Award Prizes as well Silver and bronze in 2018.

Multiples Singles more than 20  Piano and Orchestral compositions are part of my compositional average.

Winner of the Akademia Award in Los Angeles for best classical album in piano music !!! 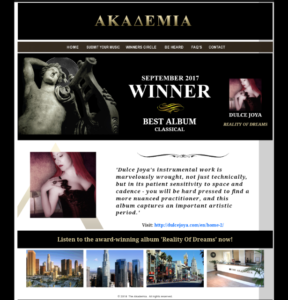 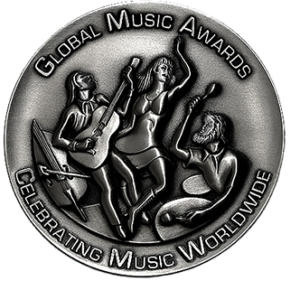 Nominated 2017 SoloPiano.com Album of the Year in contemporary modern piano!